Too late to make the masses fight the car and fossil fuel industries?

In WA Today, there is it seems a final, laboratory-tested scientific proof that man-made global warming has actually occurred. According to research that has been done at the University of Melbourne, a common species called the 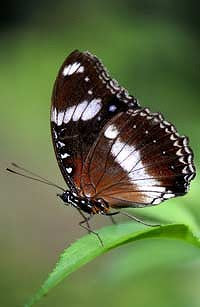 Brown Butterfly (which I am not myself familiar with) shows beyond doubt that global warming has occurred since the 1940s, and that natural cycles cannot possibly be the cause of these changes.

The problem is that these scientific studies have been done far too late. The time to start with them should have been in the middle 1970s when unprecedented rainfall occurred over almost all of the interior of the continent. At the time though, there were near parallels in terms of Alice Springs’ 1879 rainfall – enough upon my first reading of this issue to be very sceptical that man-made global warming would inevitably lead to large increases in rainfall over the bulk of Australia. However, once year after year between 1997 and 2001 brought record rainfall after record rainfall to the northwest quarter of Australia and the Nullarbor (it should really be called “Nullaqua” since it literally has no surface water due to the immense age of its soils) it was clear to me that man-made global warming was bringing rainfalls without parallel for thousands of years. The pity was that the CSIRO and Bureau of Meteorology have become so politically gagged that they cannot – as they should – educate people about the urgent need to address global warming via reduction in CO2 concentrations. Nor do the less politically passive universities, who are totally out of touch with the ultraconservative politics of suburban Australia.

The task of Melbourne University in addressing the urgent need for a zero-emissions economy is far from easy. The notion that the majority of people are capable of changing the world via protests and rallies is a novelty owing to the extremely comfortable life and low living costs in suburban Australia. However, even if governments and private sectors in other countries where car, mineral, car component and fossil fuel corporations cannot gain much power due to the paucity of mineral deposits are able to do something to reduce carbon footprints, Australia's governments and businesses simply cannot. A surfeit of resources means it is always cheapest to use the most carbon-intensive means of production, so that mass power and knowledge becomes the only answer.

The question is whether past experience has told the masses of Australia that the neede protest is futile and of no use. If it has, we are in for a disastrous time as one ecosystem after another is lost.
on Sunday, March 28, 2010