Trivialism beyond the wildest belief

In recent days my brother has become really angry at claims of inedia by the likes of Thèrése Neumann, Marthe Robin, Louise Lateau and Nicholas of Flüe. So deep is his hatred of talking about it and belief that science would show that he will not even reply to one e-mail about whether Marthe Robin's supposed fifty-three years eating and drinking nothing except the Eucharist is a legitimate record.
However, the problem with the kind of criticism of claims of inedia like those I have been witness to in the past few weeks has been that they have been accompanied by absurd claims like:
The reason saying inedia would allow the curing of famine stands as such a trivialisation is that 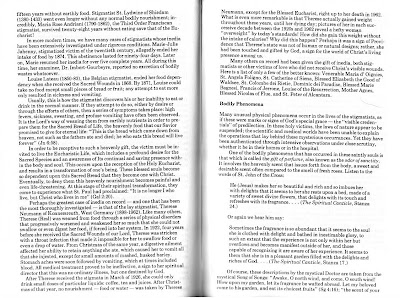 every known inedic, as documented by Michael Freze, has 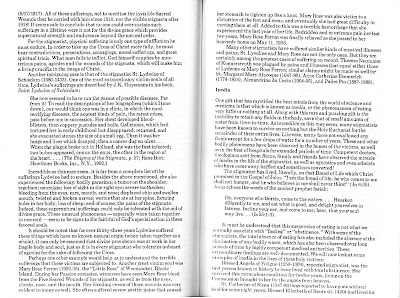 suffered very severe illnesses, and that people without the capacity to suffer as severely as a stigmatist (and Freze and all other theologians who study these phenomena) are not likely to suffer illnesses which would cause them to be unable to eat or drink in the normal manner. More than that, in a culture which as Benjamin Wiker eloquently points out, fashionable people cannot understand that there could possibly or potentially be purpose behind suffering, it is simply impossible to imagine the extremely deep feelings that 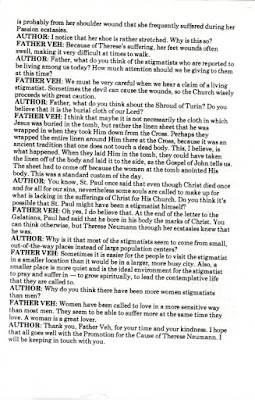 undoubtedly are necessarily part of the psychological make-up of stigmatics.


“If Epicurus and Lucretius are right and this is our only life and bodily existence is our only existence, then to try and bear unbearable suffering is unintelligible”

The consequence is that people who do not even try to understand how the other side of the culture wars makes decisions about what is right and wrong simply do not grasp how a feeling type feels laws as natural and not to be tampered with by man. These are utterly contrary to the view of the dominant thinking-oriented culture of our academia, but are in accordance with what Michael Freze and Alfred Vogl say about God being able to do deeds like giving people sustenance only on wafers for decades. They also are in accordance with the theory of intelligent design, which allows for phenomena like inedia and stigmata to occur without being “explained in terms of blind natural causes” (Moral Darwinism, p. 12).

In the absence of a militant atheist being willing to try and examine a supposed inedic day and night for decades (which nobody would consider a worthy task given the length of time involved), we are left with the problem that people like my brother trivialise inedia in the most ridiculous manner. Not only does he make the absurd claim outlined above, he also claims that every part of the story of Marthe Robin must be wrong to the point of claiming she cannot have been paralysed and bedridden. Given that everybody (no doubt) who met Marthe knew she was bedridden in a dark room, such a claim is simply implausible!
on Tuesday, March 23, 2010