A huge day for our house

Today, for the first time in a long while, I, though very tired, was forced to be dressed at a very early hour because the worn deck that had been a pest for our house for the past few years was finally to be demolished. 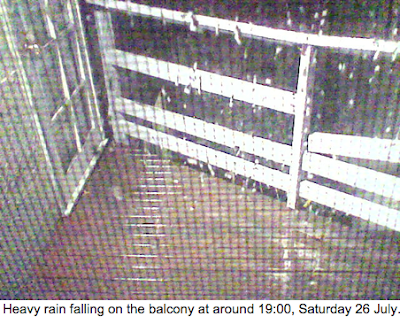 As you can see from this picture, the wood of which the frame for the balcony was made was already completely rotted as of July 2008. Since then, more of the old, rotted wood has been lost, but before the man came there had been no change from 2008.

When I was dressed, my mother wanted me to make her a cappuccino, but I was, after days and days of getting to bed at 2:00, very tired and I returned to bed with my venetian blinds closed so that the carpenter would not see my unacceptable in-bed behaviour. after a while, I did get up and watched Sydney thrashing Essendon at the SCG from 1987. Whilst I was watching a match that set up some records that do not reflect that the Swans were really masters of touch football – watch how slowly they really were moving the ball – and could never succeed when opposed from in front.

After a while, I decided to seriously watch what the carpenter was doing, and the detail of what he did was very interesting:
My mother was extremely impressed at what the carpenter had done, and also that I had talked very little about him, never mentioning issues like the miracles of Thèrése Neumann which have been angering her. I was indeed more impressed at how well he was equipped: I think of myself as a part-time carpenter but have never been able to use anything more than old equipment from my now deceased father.
on Thursday, April 15, 2010