These last two days, I have had the biggest news since my return from the holiday in Europe and America - and probably for longer than that.

Rugby team the Melbourne Storm have been found to be rorting the salary cap through keeping two accounts. This process has allowed the Storm to hide $1,700,000 in excess player payments. These were made in increments of about $15,000 on game days under the guise of hospitality payments, and the club’s owner, John Hartigan, says that he believes the players did not recognise they were obtaining income from two separate sources. In fact, Hartigan says that:


“five people at the club knew what was going on”

As a results of the NRL’s findings, the Storm 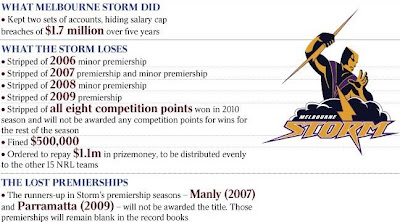 have received punishments that I find utterly beyond comprehensibility for doing so. They have lost quite literally everything in terms of premierships, and will be deprived of all points for games won this year - something I find extremely harsh given that:
There would be those who even say that the NRL’s finding the Storm are rorting the salary cap is a natural consequence of the very existence of such rules.


The market has a pretty good way of sorting itself out. No thought has had to go into salary cap alternatives (you don’t have to be too creative to think of a few) because it’s now so entrenched – there’s serious doubt, however, that the salary cap would survive a legal challenge.

To say they player payments are not “subjected to an artificial limit” because they “play for a sum which is contractually agreed upon with the club” is simply naïve and does not reflect an understanding of how a free market works. Of course a contractual agreement on a maximum fee payable is an “artificial” limit when negotiated in the context of a salary cap. It’s a form of price fixing which we don’t tolerate anywhere else in the market.

In fact, the NRL has consistently been active in preventing salary cap breaches for a long time: the Canterbury-Bankstown Bulldogs were stripped of a likely premiership for that reason eight years ago after having won nineteen consecutive games. It is easy for me to imagine that the future could produce even more secretive payments by the next power club in the NRL. What would the NRL do if it found out such breaches after more success than the Storm have already garnered?

Although one Julie says that salary cap should be challenged in the courts - and I know very well how the NSWRL’s player draft was struck down in 1991 - I recall reading when the issue of challenging the draft was discussed in the AFL that many believed a salary cap could be legal even if a player draft is not. It is probably for this reason that the Storm do not want to challenge the legality of the salary cap in court - besides fear that it would fail for whatever reason.
on Saturday, April 24, 2010