“Handegg”: not a new joke

A few weeks ago, when I talked to a stranger about the violence of gridiron and ice hockey, one person said that although American football is called “football”, it should be called “handegg” because it involves using the hands to play a prolate spheroid for which “egg” is seen as the nearest word, rather than using the foot to play a spherical ball.

I found the joke about “handegg” (taken seriously by some soccer fans who feel gridiron has usurped the rightful name “football”) funny and understood the logic behind it extremely easily, even though the only game I ever call “football” – one restricted even in theory to the Unenriched World due to its requirements for large areas of land in mild to hot climates – uses a projectile that is more properly “egg”-shaped than is a gridiron ball. 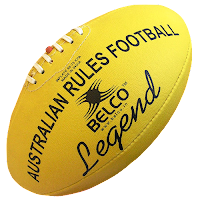 What surprised me is how the joke of “handegg” is actually almost as old as gridiron itself, as shown by the above article from 1909 - a time when gridiron was under immense pressure because so many players were dying in college games. Nowadays, the joke of “handegg” is largely confined to England, where “football” is commonly used to refer to soccer rather than Australian football.

Many of those who use “handegg” are in fact extremely rude about gridiron and assume its stop-start nature reflects the greediness and obesity found in Americans. In fact, though they do not like to admit it, gridiron is a product of the most secular and “European” parts of America: college campuses (though it is actually played on very conservative colleges as well as liberal ones). It is not unimaginable that gridiron would have spread more widely without the competition of soccer: the factor limiting it is not land supply as with football, but equipment and training requirements which are much higher than soccer.

A notable fact is that “handegg” is found very offensive by many Germans because Handegg (pronounced “hahn'-derk”) is the name of a  Swiss village near the lake Gelmersee and regarded as one of the most beautiful localities in that area.
on Tuesday, February 19, 2013