Because my experience agree in many ways with the notion of home education and because I have learned over the years as much from my parents and their books as I have from education either at university or especially at school, I have over the last few years taken quite a bit of interest in alternative education. This leads me to learn about the conservative homeschooling counterculture that has been thriving in parts of the United States over the past decade or two.

Cleaning up my e-mail tonight, I found a 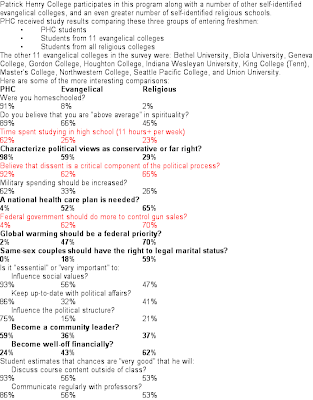 table dealing with the political and cultural views of students of the conservative Patrick Henry College - whose premises reming me very closely of buildings I have seen many times riding through outer suburban Melbourne on buses.

The difference between their views and even those of students of other religious universities are striking on almost every issue. One can imagine how far these students really are from the world of university students in Europe, Canada and New Zealand! What I have done in the table is to compare their views with those of the equally distant outer suburbanites of Australia - with areas where outer suburbanites would differ from Patrick henry students marked in red and those where similarities are likely marked in bold.

What is most striking and agree with my contention that conservatives are far less materialistic than liberals is that only 24 percent of students at Patrick Henry College have an overwhelming desire to become well-off financially, as against 62 percent from more liberal religious colleges. I imagine than in wholly secular colleges the proportion would be much higher still - most likely above eighty or even ninety percent.

Such a result, when correlated with

can only be interpreted as proof that conservatives really are much less materialistic than liberals - a lack of materialism that seems to be shared by Australia's outer suburbs when one considers the lack of demand for luxury or non-mainstream goods there. It is my sincere hope that this character of the far right is recognised even for its negative aspects at least in Australia and that less conservative groups realise they may not survive if they do not deal with the problems materialism creates for them demographically.
on Wednesday, June 10, 2009