The mistaken belief in businessmens' conservatism

Many people today are very sceptical of big government because they realise it has brought to Eurasia, the Americas and New Zealand many severe social problems such as sub-replacement fertility and welfare states that could easily collapse as the old age dependency ratio rises. Social scientists also note how large welfare states depress fertility and countries with reasonable fertility always have no welfare whatsoever.

Some forecast that because of high old age dependency those nations will, like Japan already has to some extent, turn increasingly to robots to do work previously done by humans. Those who advocate abolition of the welfare state generally believe that either pensions provided by private companies to attract workers or stronger, larger families will be better at providing for those who cannot work due to age or physical incapacity. With more incentive to work because welfare is unavailable, these people believe that people would save more and create long-term economic growth. Austrian economists - the prominent believers in this theory - argue that before World War I this method provided the most sustained economic growth in the history of the world. They further think that much higher living standards would be obtained if the private sector carried out services done in Europe, North America and New Zealand by the public sector, because resources would be used more efficiently.

The problem with this viewpoint is that innovative businessmen themselves are often far from socially conservative. Andrew Carnegie, though praised by the traditionalist Catholic Thomas Woods in his Politically Incorrect Guide to American History, was anything but a cultural conservative, being a strong supporter of Darwinism. Henry Ford in his later life was a supporter of Nazism, which paleoconservatives view in the same light as socialism and hence a 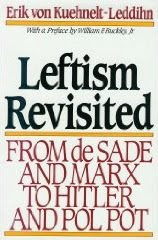 This lack of (social) conservatism amongst big businessmen is a question which has to be asked seriously by all involved in sociology. The most logical explanation for why business leaders would not be socially conservative is that, in order to compete on a free market, they consistently have to improve their product and become as efficient as possible in marketing it to people who are willing to buy their goods - most usually because they are made at a cheaper price that other businessmen can offer. Erik von Kühnelt-Leddihn points out that capitalism is as much in favour of progress as is socialism. In countries which according to the Austrian theory of "division of labour" are forced to specialise in whatever they have the least degree of competitive disadvantage, the incentive for progress will always exist because it is in advanced technologies where lack of usable land or labour is least important. Thus, we see "Small Island States" along with high mountain countries like Andorra and small city-states like Hong Kong become tax havens and dependent on tourism. Both business and tourism create very dense centres of employment.

Whilst tourism can provide very valuable incentives to conserve (as with southern Africa's wildlife) it is undoubtedly a barrier to sustainable demography in small island, high mountain and small city states because of their inherent scarcity of usable land, with the result that fertility rates even with their business-oriented tax systems are very low. In these ultra-urban environments, children are a liability because the path to a future requires a great deal of education. Exurbs, where family businesses can thrive and living costs are low enough to permit survival on one income, are the only non-primary producing areas where fertility remains high, but no land in these business-centred states exists to build exurbs.

The consequence of this is that it is efficient for big businessmen to believe in the very things decried by the Right, such as the legitimacy of abortion, homosexuality and cohabitation. Indeed, the big businessmen in a small island, high mountain or city-state business centre has more incentive to support the legitimacy of those things than does a politician in a larger state where primary production is more important.

Thus, it is wrong to assume that a limited-government nation will necessarily be so socially conservative as many on the Right wish. The very Industrial Revolution with all its economic gains for Eurasia and most of the Americas does not create a socially conservative culture even without big government.
on Tuesday, June 16, 2009