The depth of the problem with free market conservation

In The Politically Incorrect Guide to Capitalism, Robert P. Murphy says that:

Although I can sympathise to some extent with what Murphy says about how the free market can help conserve species, what I do know from basic books on global plant biodiversity that in fact the heavily glaciated regions of Europe and North America are of practically zero conservation value at all because all their species are shared with adjacent unglaciated regions and migrated a mere ten thousand years ago. Their species also generally have much larger populations than those of hotter unglaciated regions. In biological terms, the species that dominate cool to cold glaciated regions are generalists combining extreme competitiveness and high tolerance. They also have very reliable runoff with coefficients of variation usually around 10 percent, which is about the level required for reliable hydroelectric dams.

Despite their low conservation value, it is precisely these regions where free markets encourage conservation. The impossibility of agriculture in very cold and/or wet climates, plus the attraction provided by the

tourism a lucrative if costly business, as shown by these pictures from

On the other hand, in Australia with soils containing soluble nutrients at levels an order of magnitude below European or North American soils and runoff ratios that range from ten to thirty percent those of comparable climates elsewhere, the free market does almost nothing to encourage conservation owing to the longage of both energy and land supply making agriculture cheaper than anywhere else in the world. This encourages highly extensive farming, but because there is little scenery to compare with that of most other continents outside of a few very remote areas and the Wet Tropics, Australia has lost completely many of its important ecosystems, especially grasslands. Australia is also ranked as the fourth most biologically diverse country in the world behind Brazil, Indonesia and Colombia, which of itself should require much tougher conservation standards than for other developed countries, although seventy-five percent of Australia's native plant biodiversity in concentrated in the Wet Tropics and South West Botanical Province of WA. A uniform requirement of 5 percent land in conservation reserves as suggested by the United Nations appears extremely lenient to tropical countries, Australia and southern Africa.

It would undoubtedly be better if levels of conservation required were graded according to that country's biological diversity and the fragility of its ecosystems - so that countries with unusual climate or runoff variability or poor soils were required to conserve more land. In heavily glaciated high latitude regions, unusable land undoubtedly provides all necessary conservation, but in countries like Australia which rank highly both in diversity and "ecosystem fragility" that is simply not the case and the free market provides distinctly inadequate conservation, even if state forests may encourage more rapid logging than under free market private forests (though there exists the danger of clearing then).

However, Australia's inability to establish higher conservation standards vis-à-vis other nations for Australia has even direr consequences. 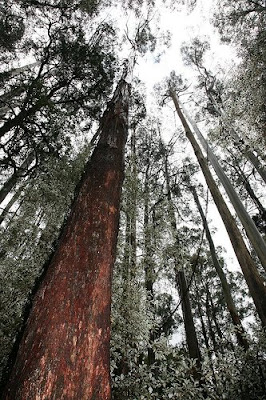 Mountain ash and other tall eucalypts are the most efficient plants in the world at absorbing rainwater owing to their deep, dense root systems and long, thin trunks. Moreover, this efficiency at absorbing water makes the forests of the Central Highlands in Victoria, according to this ABC article, the world's most efficient carbon sinks when pristine. Full Story states that their efficiency as a carbon sink is greatly reduced when disturbed by logging, but the problem is even worse because it is now clear that the present (since 2006) climate is already too dry to sustain such trees indefinitely. This will both add to increases in atmospheric carbon dioxide and ultimately wipe out the native flora of the High Country and its foothills to be replaced by drier-climate trees or even shrubland.

The ultimate lesson from what I have said is that free markets, whilst able to provide incentives for efficiency and conservation of resources, have an easily explainable tendency to do so in precisely the places that have the lowest biological conservation value. It is for this reason that one cannot recommend relying on capitalism to solve every environmental problem, even when government has often failed badly.
on Wednesday, June 17, 2009